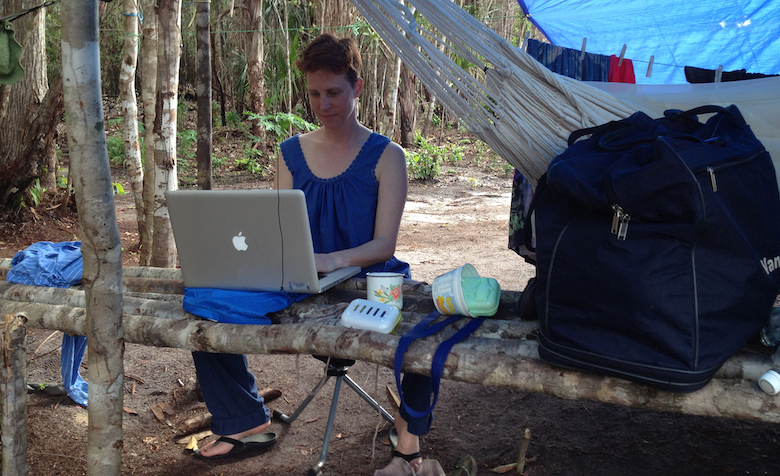 Lainy Day sets up an office in her camp at St. Cuthbert’s, Guyana, on a research trip in 2013 to connect and help students back in Oxford at the University of Mississippi. Submitted photo

Lainy Day, an associate professor of biology at the University of Mississippi and director of the university’s neuroscience minor, has published an article in Nature, an international journal that publishes the finest peer-reviewed research in all fields of science and technology.

Part of an international team, Day has helped unlock essential new information about the evolution of birds, known as avian evolution. The breakthrough research brings critical new data that will ultimately help with species preservation.

This research initiative is part of the BK10 project, which seeks to collect genomes, sets of genetic instructions, from all existing bird species on Earth. The project’s initiative has resulted in the world’s largest database of bird genomes.

The research reported in Nature includes 363 bird species, 267 sequenced for the first time. This amounts to representative species for 92% of all avian families.

“By examining multiple lineages and noting genes that diverge among specific lineages, we may discover, for example, the genes contributing to loss of flight in ostriches, or those that allow a songbird to trill beautiful notes in contrast to the deafening call of the rooster,” Day said. “We want to know how particular genes allow for trait evolution.”

The research published in Nature has been featured on a BBC podcast; on the website of Cosmos, a quarterly news magazine; and in an article distributed by the United Press International news service.

Day, who joined the Ole Miss faculty in 2006, become involved in this research via the Manakin Genomics Research Collaborative Network, initiated by herself and five other core researchers and supported by a $500,000 grant they secured from the National Science Foundation. Members of the BK10 project and the Manakin Network then recruited other scientists worldwide to sequence avian genomes from DNA samples collected in the wild or in aviaries.

Day’s research focuses on 13 of the 50 species of the manakin family of birds, which live in tropical areas across the Americas. For this initiative, she contributed DNA samples from one of the two species of manakins represented in the Nature manuscript.

The genome was sequenced from tissue samples of the golden-collared manakin that Day collected in Panama when she was doing research in collaboration with the University of California at Los Angeles.

Preserved in a freezer at -80 degrees Celsius, samples such as these are critical to her research. Day’s focal research seeks to understand the genetic language that shapes complex behavior and drives brain evolution.

Manakins are ideal for these studies, as males use complex acrobatic mating displays punctuated by loud wing sounds to attract mates. In separate research, Day has shown that female fancy for complexity in displays has driven increased brain size in manakins.

“As we begin to sequence genomes for each of the species I work with, we come to understand the formula for creating athletic prowess,” she said. The BK10 project aims to share these manakin genomes and those of all birds with the world.

“The database the BK10 project has created is far larger than any others,” she said. “Scientists have been looking at fewer genomes in depth. With this manuscript and continuing work of the Manakin Research Collaborative Network and the BK10 project, we provide, for the first time, sufficient genomic data to unlock the mysteries of bird evolution as well as fundamental principles of evolution.”

Brice Noonan, associate professor and acting chair of the Department of Biology, called Day’s work critical to “understanding the evolution of complex avian behavior. Its link to neurological development has long been recognized,” he said.

“This most recent publication of Dr. Day and her collaborators makes significant strides toward a better understanding of the genetic underpinnings of evolutionary change that is sure to set the stage for not only her research, but that of evolutionary biologists the world over.”