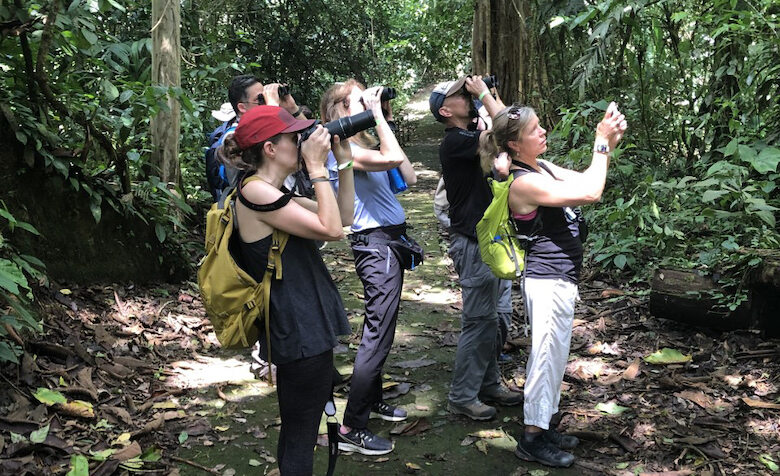 Ecotourists explore a rainforest in Costa Rica. UM biologist Richard Buchholz is organizing an international research network focused on examining the effects of ecotourism on the environment. Submitted photo

Ecotourism is a billion-dollar industry that gives travel enthusiasts an intimate look at the world’s most breathtaking natural environments. While ecotourism is often thought to be synonymous with sustainable travel, its recent growth in popularity could have a negative impact on local wildlife and ecosystems.

“Many of us hope to one day experience the thrill of seeing elephants strolling the African savannah, or the colorful fishes and anemones that adorn a tropical coral reef, or some other fascinating creature in its natural habitat,” said Richard Buchholz, a University of Mississippi biology professor. “Unfortunately, as the human population grows and international travel becomes more accessible, these natural places won’t survive the onslaught of tourists without careful management.

“If we want future generations to be able to see the planet’s wonders firsthand, rather than just read in books about ‘what used to be,’ we have to learn how to live sustainably.”

Buchholz, director of the UM Center for Biodiversity and Conservation Research, is working to organize an international research network focused on investigating the behavioral effects of ecotourism and developing more sustainable recommendations.

When the pandemic brought worldwide travel to a halt, one positive outcome came to light. The absence of human disturbance in natural areas allowed wildlife to emerge and become more visible, Buchholz said.

“Clearly, the mere presence of humans was having a negative effect on animal behavior,” he said. “We realized that we would need an international approach to understand the ways that different human cultures might have an impact on wild species ranging from butterflies to whales.”

Buchholz and several of his doctoral students traveled to Costa Rica in July to help run a workshop at the Animal Behavior Society’s annual meeting. The workshop, “Intersections Among Animal Behavior, Conservation and Ecotourism,” served as a jumping off point for scientists, students, economists and industry representatives to begin discussion around sustainable ecotourism.

Jessica Stamn was one of those students. The willingness of the group to address conservation problems impressed her, she said.

“Everyone involved in the workshop had the common goal of understanding the impacts ecotourism might be having on wildlife species, and that passion was felt throughout the entire workshop,” Stamn said. “I felt particularly inspired when I met the attendees who were not involved in academia, but were still committed to promoting conservation through animal behavior research.

“Not only did I get to meet some really interesting people who worked on really cool projects, but I was also exposed to a ton of conservation-related jobs that I had not been aware of before.”

Stamn and her UM classmates will work with national and international collaborators to compile information from the workshop and highlight the top questions surrounding ecotourism and animal behavior. These questions addressed how ecotourism influences species reproduction, communication patterns and ecological soundscapes, among other things.

Buchholz plans to use the connections he made at the meeting to continue building a research network.

“We’ll investigate sources of funding that could allow the network to compare and contrast the answers to those research questions in different study systems – that is, different types of animal-tourist interactions – around the world,” he said. “Ultimately we will tie these into the United Nations goals for a sustainable future.”

The UM Office of Global Engagement awarded Buchholz an International Collaboration Grant to fund the project. The Office of Research and Sponsored Programs, Department of Biology and Graduate School also contributed travel support.

For more information about the Center for Biodiversity and Conservation Research, visit https://cbcr.olemiss.edu/.