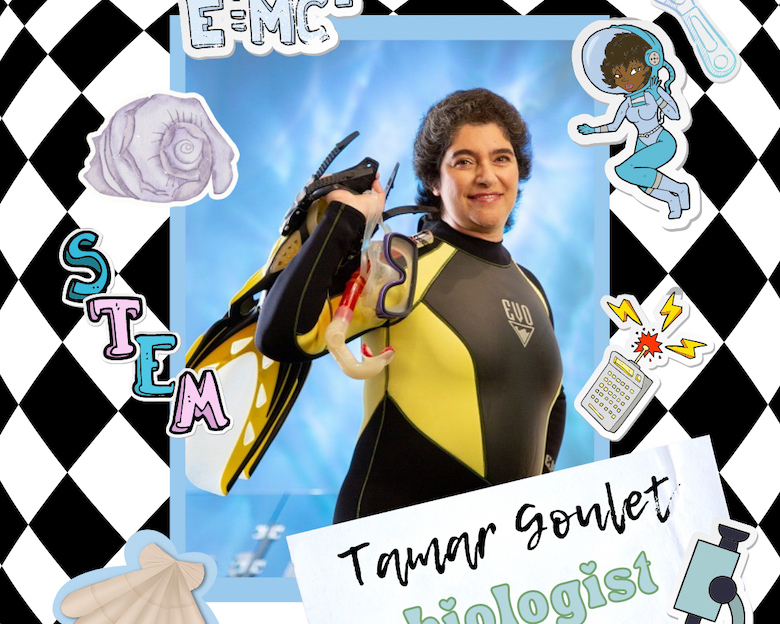 Tamar L. Goulet loves sharing her passion for the sciences with anyone who will listen, especially young women interested in pursuing a career in the male-dominated field.

This weekend, the University of Mississippi biology professor will have a national audience as she takes CBS’s “Mission Unstoppable” into the field to learn about coral reefs in the Florida Keys.

Goulet said her goal is simple: to show at least one girl that she can be a scientist.

“As cheesy as it may sound, if one girl watches that episode and says, ‘Look, she’s a scientist. I can be a scientist too,’ then that’s worth its weight in gold.” Goulet said. “There are already so many factors that stand in the way of training and advanced degrees.

“I hope no girl chooses not to pursue her dream because someone told her she couldn’t do it.”

Goulet has an opportunity to reach a lot more than one girl this weekend. “Mission Unstoppable” is broadcast nationally on CBS at 7 a.m. Saturdays. 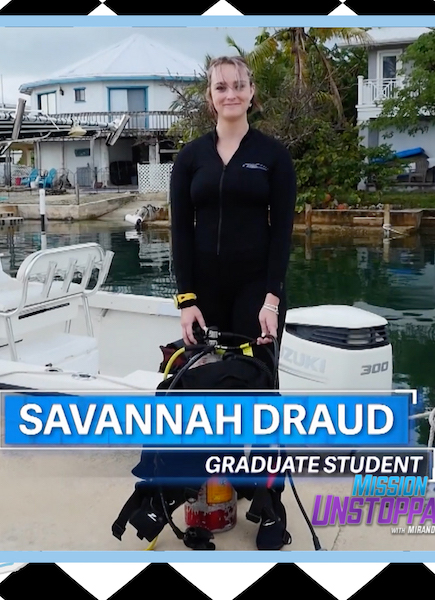 For this episode, Goulet and her graduate student, Savannah Draud, brought the “Mission Unstoppable” crew along as they studied octocorals living in the only living barrier reef in the United States.

Mark McCauley, a postdoctoral researcher at the University of Florida, said the time he spent in the field and in the water with Goulet made him the scientist he is today.

“Some of the defining moments of my time as a Ph.D. student were the opportunities she provided for field research,” he said. “I was given the support to establish my own experiments and ask important ecological questions.

“Dr. Goulet is strongly driven toward success in the field, and I hope to continue to grow as a researcher from the skills I learned within her lab.”

If She Can, I Can

Goulet’s appearance on the show is a part of her IF/THEN ambassadorship, an effort to position women in STEM as role models for middle school girls. The program, launched by the American Association for the Advancement of Science, makes its ambassadors and their work available to classrooms, media and educational partners

“There are a lot of very talented female scientists, but they’re not visible to the public,” Goulet said. “The public-facing scientists – Bill Nye, Carl Sagan – are all men. The scientific correspondents for the major networks are men.

“One of the ideas behind the ambassadorship is to make extremely talented women visible to the public.”

IF/THEN ambassadors are driven by the mantra, “If she can see it, then she can be it,” which is why the organization works to spotlight the work of women scientists and increase their visibility in media.

As an ambassador, Goulet gets to share her love of science on a larger scale.

She’s been a science fair moderator in California, spoken to Girl Scouts in Georgia and teen girls at a science camp in Texas. She’s taught elementary school students about symbiosis over Zoom and served as a panelist during the 2021 AAAS annual meeting. She’s also working on a local project that will introduce middle and high school students to the science in their own backyards.

She even had a life-size statue made of her in her diving gear as a part of a larger exhibit of 120 statues of IF/THEN ambassadors in Dallas.

“Dr. Goulet’s work that focuses on increasing women’s participation and visibility in STEM fields is incredibly important,” said Lee Cohen, dean of the UM College of Liberal Arts. “It allows women, who are underrepresented in STEM fields, to ‘see themselves’ as scientists.” 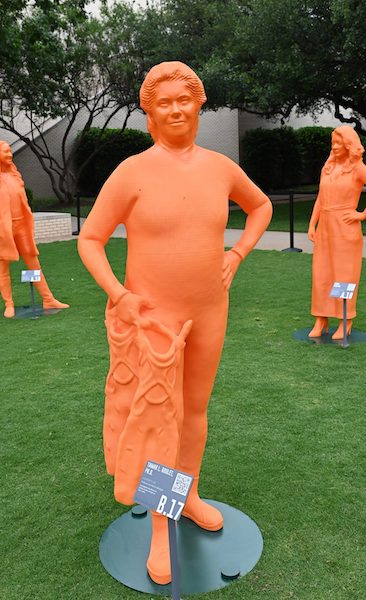 Tamar Goulet had her likeness 3D-printed as statue as a part of her IF/THEN ambassadorship, which works to make successful women in STEM available as media and educational resources while also providing opportunities for them to mentor young women. Photo courtesy IF/THEN/Orange Capital Media LLC

Students want role models who connect their reality with their dreams, Cohen said.

“There is considerable data to indicate that biases – implicit and explicit – shape students’ perceptions of and access to particular fields of study,” he said. “Working to address these biases and creating strategies to increase women’s access to STEM fields will help to develop a more diverse group of scientists, which will lead to greater discoveries and ultimately a more inclusive and better future for all.”

IF/THEN is only the latest form Goulet’s passion for sharing the sciences has taken. After completing her master’s degree, she wrote as a science reporter for the Richmond Times Dispatch through an AAAS fellowship that placed scientist and engineers in mass media outlets.

“I have always been interested in communicating science to the public.” Goulet said. “It’s one of the reasons I teach a nonmajors introductory course; because I find it challenging and rewarding to explain science and get people who aren’t scientists excited about science.”

Her husband, Denis Goulet, is coordinator of laboratory programs in the Ole Miss biology department as well as her partner in research and publishing. He said her excitement for and devotion to her work and the people around her is what makes her a mentor to her students.

“My wife leads by example, devoting endless time to her job and her family,” he said. “She is a role model for how to pursue one’s dreams and achieve goals.”

Tune into “Mission Unstoppable” on CBS at 7 a.m. Saturday to learn more about Goulet and her work.