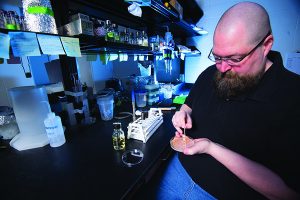 Patrick Curtis, an associate professor of biology at UM, was recently awarded an International Space Station, or ISS, Flight Opportunity Award. The award title is “Assessment of Whole Genome Fitness of Bacteria under Microgravity” and that’s exactly what they are doing: sending bacteria from his lab to the ISS in the coming months. Once there, it’s hoped that a better understanding of bacterial response to microgravity can lead to better bacterial control mechanisms, which will be invaluable to maintaining both human and machine health aboard long-term space flights. Photo by Kevin Bain/Ole Miss Digital Imaging Services.

The purpose of the project, titled “Assessment of Whole Genome Fitness of Bacteria under Microgravity,” is to better understand how bacteria respond in very weak gravity, which could possibly lead to better bacterial control mechanisms in space. These mechanisms could prove invaluable to maintaining both human and machine health aboard long-term spaceflights.

“It’s pretty common knowledge that living organisms change in response to microgravity and spaceflight, such as humans losing bone density, but hardly anyone has looked to what happens to bacteria under those same conditions,” said Curtis, who joined the department in 2012. “While one could think bacteria wouldn’t care about gravity, being so small, the handful of studies performed show that bacteria do respond to spaceflight. This can be a big deal, since bacteria live everywhere and can have a tremendous impact on our lives, either by affecting human health or the functioning of equipment.”

Bacterial biofilms clogged the water system aboard the former Russian space station Mir, Curtis said, so understanding how bacteria react to spaceflight is important for further space exploration. “The problem with previous studies is that they mostly focused on one or two specific aspects of bacterial life. My laboratory is among the pioneers of a technique called TnSeq, which uses random mutagenesis and high-throughput sequencing to assess the usefulness of every gene in a bacterial genome under a given condition.”

Curtis’ research group will employ this technique to explore factors that influence bacteria when living aboard a spacecraft.