Professor and Chair
Department of Biology
The University of Mississippi

The Roman laboratory studies the molecular and neural mechanisms of behavioral plasticity.  We are interested in how organisms use their experiences to adapt to changes in their environment.  We focus most of our efforts on exploration, associative learning, and ethanol tolerance and self-administration. We are currently investigating the molecular and cellular mechanisms that govern these behaviors using Drosophila melanogaster as our model system. The application of the modern genetic tools available in Drosophila allows us to finely dissect the molecular events and the underlying neural circuits that drive the plasticity in these behaviors.

When animals encounter new or changing environments, they use exploratory behaviors to gather information and become familiar with the new features within their environment.  This form of exploration, driven by neophilia or the attraction to new stimuli, is extremely compelling for many animals.  Many hungry or dehydrated animals will explore and habituate novel stimuli within their environments before they satisfy their physiological needs for food or water.  Some animals will also approach predators in order to familiar themselves with novel objects within their environment.  High levels of exploration are also found in strongly invasive species, allowing them to find new habits and food sources.

When Drosophila are placed within a simple novel circular arena, they visually explore the boundary.  We use this simple assay to quantify exploration in Drosophila melanogaster.  Taking genetic and transgenic approaches, we identify the genes and neural circuits necessary for the neophilia and the ability to learn their environment.  We are also using different Drosophila species to determine the genetics changes that lead to losses in neophila during the evolution of ecological specialization.

The ability to learn, form memories and recall those memories are essential for using experience as a guide to alter behavior.  In associative learning, an animal learns that one stimulus can predict the presence of a different stimulus or event.  We use a Drosophila olfactory learning paradigm to dissect the molecular and neural events involved in associative memory formation.  In this paradigm, an odorant is paired with a mild electric shock.  The flies learn to associate the odorant with the shock and then avoid this odorant in future presentations.  Our efforts in associative memory formation have been mostly focused on dissecting the function of heterotrimeric G(o) signaling within the mushroom body neurons during memory formation.  We have found that G(o) inhibition of presynaptic activity is required in a limited group of neurons during memory formation.  We are currently investigating the mechanism by which this occurs.  Interestingly, we have found that within the γ lobe neurons of the mushroom bodies G(o) is required to inhibit presynaptic function, and this is necessary for the formation of an attention-like mechanism operating within these neurons.  This study has demonstrated a new role for metabotropic presynaptic inhibition in learning and is finally shedding light on the function of these γ lobe neurons in the olfactory learning circuit. Following up on this work, we are currently exploring the hypothesis that associative memory formation may have evolved as the protection of the paired conditioned stimulus from habituation within the memory circuit.  Other areas of experimentation include identifying G(o) function in the α/β lobe neurons, identifying the activating receptors and the effectors required in each cell type for learning, and determining how endogenous circadian clocks modulate learning and memory. 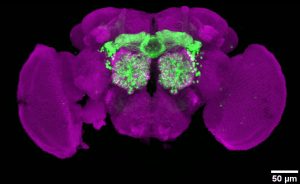 Alcohol addiction is one of the most serious health problems facing our country.  Approximately 1 in 20 Americans suffer from this disease, but the impact extends far from just addict.  Family and friends also suffer; alcohol is a component in almost 40% of all violent crimes; traffic accidents due to alcohol impairment claim almost 10,000 lives every year in the US.  The descent from alcohol abuse to alcohol addiction is driven by the rewarding properties of this drug and the formation of tolerance to the drug after binge drinking episodes.

Drosophila melanogaster is an excellent model system for examining the effects of alcohol on behavior and neural functions.  Flies consume alcohol because of the hedonistic properties of this drug.  Flies also develop long lasting tolerance after binge alcohol exposure. The Dunc13 presynaptic protein binds alcohol at physiological levels.  The Roman lab is examining the role of this alcohol binding protein in the development of alcohol tolerance, and increased self-administration. 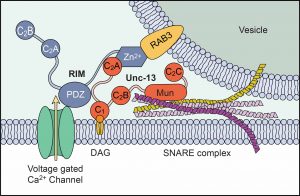