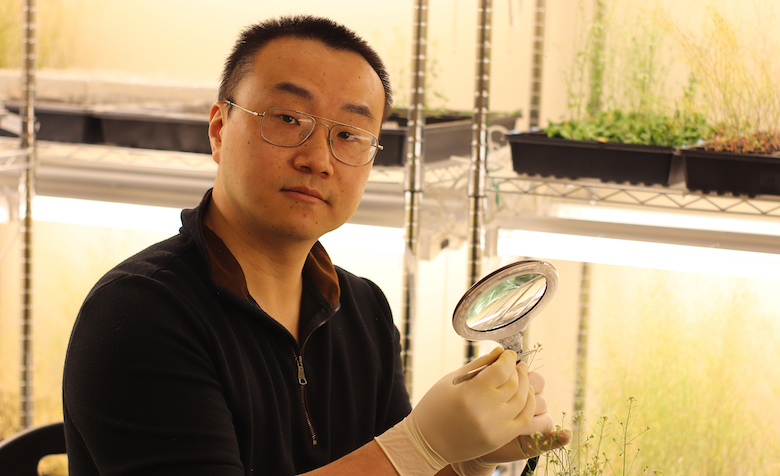 Yongjian Qiu, an assistant professor of biology at the University of Mississippi, is studying a plant gene that could help solve a problem caused by warming global temperatures. Qiu’s work in this field is the subject of a new Nature Communications paper. Submitted photo

Yongjian Qiu, an assistant professor of biology, is studying a plant gene that could help solve a problem caused by warming global temperatures in which a plant stem grows too fast, damaging the plant’s biomass and leading to severe crop reductions.

Qiu’s work in this field is the subject of a new Nature Communications paper, Qiu’s first scientific journal paper as a main author while at UM. Graduate student Abhishesh Bajracharya, who is pursuing a Ph.D. in biological science at UM, serves as a co-author on the paper, which was released April 6.

“As a young UM faculty member, this paper means a lot to me,” said Qiu, who joined the faculty in 2019. “I’m excited and more confident with my career at UM. It proves that I’m competent in accomplishing a research project with good quality and makes me more confident when carrying out the other exciting research projects in my laboratory.”

Increases in global temperatures due to climate change are expected to drastically reduce crop productivity, so understanding the mechanism of temperature signaling in plants has become important for devising strategies to sustain crop production in a changing climate.

The Qiu Laboratory at the university is searching for an understanding of the mechanism by which external and internal signals, including temperature fluctuations, co-regulate plant growth and development to improve the functional traits of economic crops.

“When the department interviewed Dr. Qiu, it was his research aimed at exploring biological solutions to coming agricultural challenges associated with climate change that really grabbed our attention,” said Brice Noonan, acting department chair and associate professor of biology. “To see him so quickly bring to publication a study that reveals a novel gene influencing plant growth – and crop yield – is quite exciting.

Part of the lab’s research is examining the plant gene PIF4, which is a key link in promoting stem extension in various plant species, including economically important crops. The excessive lengthening of stems in certain plants also can cause the stem to bend, leading to nutrient loss, which also affects crop productivity.

“Understanding at the molecular level how this gene is produced and maintained in plant cells is central to finding the solution to solving the problem with stem growth and yield loss,” Qiu said.

“The study we just published found a novel protein called RCB that helps to stabilize the PIF4 protein when plants are facing temperature elevations. Therefore, we are one step further in understanding how global warming affects plant growth through the central regulator PIF4.”

Qiu’s examination of this issue began when he was an assistant project scientist at the University of California at Riverside, working in plant biology professor Meng Chen’s laboratory. Qiu’s postdoctoral research focused on how light and temperature signals regulate plant growth and development, and in 2019 he published his first paper on plant structural changes under warm temperatures – called thermomorphogenesis – in Nature Communications.

“The universal thermomorphogenetic mechanism shared by many plant species, once identified, would help us and other scientists design climate-smart crops that may sustain their biomass and grain yield when facing temperature fluctuations,” Qiu said.

His research helped him discover a novel function of a protein called HEMERA involved in thermomorphogenesis that regulates the stability and activity of the PIF4 protein.

“The absence of HEMERA’s function in a plant would lead to a growth defect in the short stem at warmer temperatures,” Qiu said. “Since then, I realized the importance of PIF4 and got interested in unveiling the entire pathway underlying the regulation of PIF4 level and activity when plants face temperature fluctuations.”

Qiu and Bajracharya’s Nature Communications paper continues an exploration of how the RCB protein and the novel function of the HEMERA protein involved in thermomorphogenesis interact with PIF4. They are still searching for how that interaction is achieved to regulate the stability and activity of PIF4.

The full title of the paper is “RCB initiates Arabidopsis thermomorphogenesis by stabilizing the thermoregulator PIF4 in the daytime.” Joining Qiu and Bajracharya as authors are members of the Institute for Integrative Genome Biology at the University of California at Riverside.

“I’m thankful to my postdoctoral adviser and his team for their contributions and efforts in pushing this publication,” Qiu said. “But at the same time, I also truly appreciate the support from the Department of Biology, College of Liberal Arts and UM.

“The work would not be accomplished without the initial start-up funding, the renovation of my new laboratory and the assistance from the previous and current chairs, staff and colleagues in my home department.”

Qiu received his bachelor’s degree from the University of Science and Technology of China, a leading Chinese research university. Working on his undergraduate thesis in his junior year, he joined a plant molecular biology lab that focused on plant resistance against a variety of stresses, such as drought, salt and oxidative stresses.

“That was my first contact with plant physiology and molecular biology, and immediately I fell in love with it,” Qiu said.

“I learned that as immobile organisms, plants need to develop complex systems to cope with the ever-changing environment, and I realized that understanding how plants sense and respond to each environmental stimulus is the key to solving some critical agricultural issues we humans are facing in the 21st century.”

After receiving his doctorate in plant science at Washington State University, Qiu worked as a postdoctoral associate at Duke University and at the University of California at Riverside before joining the Ole Miss faculty.

Qiu said he was drawn to the Department of Biology because of its open and collaborative work environment for new faculty members. He also chose UM because of the diversity of research backgrounds among its biology faculty, covering fields such as cellular and molecular biology, evolution, ecology and more.

“This is the biology department I prefer because I believe the interactions between scientists with different backgrounds will foster innovative research that has the potential to solve the most important scientific questions,” he said. “I feel very comfortable talking with my peers and discussing research topics with them.”

Since joining UM, Qiu has involved more than a dozen Ole Miss students in his research endeavors. This semester, two graduate students and eight undergraduates are working as research assistants in his lab.

When working with students, Qiu remembers his beginnings in plant biology and the mentorship of those who assisted him along his journey as he helps train the next generation of scientists. He also is guided by his belief that science and technology are the essential driving forces for human survival and progress.

“Although some of them may not stay in academia, I hope that their research experiences in my laboratory would help them look at the world in a little different way,” Qiu said. “We scientists should communicate and collaborate to solve hard questions and improve our understanding of nature as well as help our civilization last as long as possible.”