Ole Miss Asks ‘Where Are You Going?’ in Latest TV Commercial 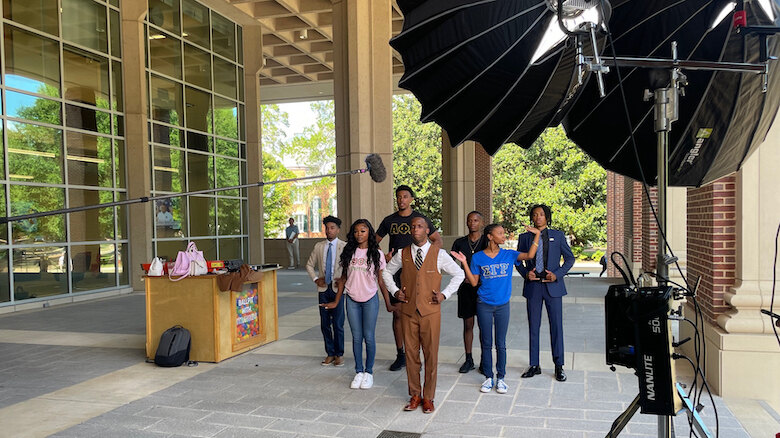 Students prepare to show off their steps during filming for the university’s new national commercial, which debuts Sept. 17 during the Ole Miss-Georgia Tech football game. The spot features several Ole Miss students, faculty and alumni, who share their perspectives on how the university has inspired them to build their legacies. Submitted photo

The University of Mississippi debuts its new television commercial Saturday (Sept. 17) during the football game between Ole Miss and Georgia Tech on ABC.

The 30-second commercial, titled “Where are You Going,” features Ole Miss students describing their personal aspirations paired with popular spots on campus and in Oxford, showing viewers where leaders are made and legacies are born.

“There is an energy and a vibrancy that you can feel at Ole Miss,” Chancellor Glenn Boyce said. “The university is experiencing some extraordinary achievements and triumphs right now, from our largest freshman class ever to record-high retention and graduation rates to celebrating 60 years of integration.

“Ole Miss is a place where you can pave your own path and define the legacy you want to leave.”

Shot on campus and around the historic Oxford Square, the commercial features some of the university’s best and brightest students, faculty and alumni, including:

“In fall 2020, we launched the university’s brand platform, ‘Build Your Legacy,’ as a call to action to current and prospective students about the lifetime of possibilities available to them by enrolling at our university,” said Jim Zook, chief marketing and communications officer. “‘Where Are You Going’ expands on that initiative by offering a glimpse into just a few of the ways that Ole Miss inspires our future leaders to build their own legacies.”

You can watch the new commercial at https://www.youtube.com/olemiss.