Instructional Professor
Department of Biology
The University of Mississippi

Spiders have long been my main research focus as they are an amazingly diverse group of organisms. Spiders have clear and unambiguous synapomorphies (the evolution of the spigots and spinnerets and their use of silk) yet, at the level of families, relationships are still not clear. Spiders represent a “megadiverse” group rivaling some of the large insect orders with credible estimates of over 100,000 species, but unlike the other large orders of arthropods, they are the only such group to be entirely predatory. Their predatory nature makes them particularly interesting for studies focusing on courtship and sexual selection: selection pressure in the form of cannibalism can be swift.

Twice yearly, for the past 10 years, there has been an unusual evening outing at Northwest Mississippi Community College. As many as 48 students have joined Instructors Patricia Miller (NWCC) and Gail Stratton (Univ. of Mississippi) and others on a spider walk. Typically, the outing has been to the NWCC farms and the students are often joined by Bud Donahu, Bobby King and Carol Cleveland. Students learn how to handle spiders safely and learn to recognize and identify several different kinds of wolf spiders.

Here are some highlights:

In the spring of 2004, as part of a collaborative project with the University of Mississippi, Northwest students will use GPS units to mark specific location of individual spiders. The spiders will be marked and on subsequent nights, we will see how far individual spiders have moved.

In the fall of 2001, we had the largest group ever! 45 students joined us for the spider walk. 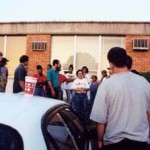 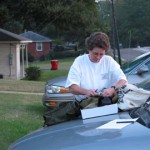 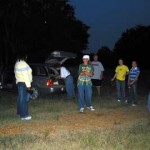 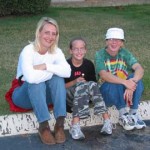 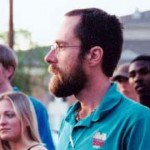 HONORS THESES COMPLETED UNDER MY DIRECTION

PUBLICATIONS (All in refereed journals)

Stratton, G.E. 2005. Evolution of ornamentation and courtship behavior in Schizocosa; insights from a phylogeny based on morphology (Araneae, Lycosidae). Journal of Arachnology. 33:347-376.

Stratton, G.E. and G.W. Uetz. 1986. The inheritance of courtship behavior and its role as a reproductive isolating mechanism in two species of Schizocosa wolf spiders (Araneae: Lycosidae). Evolution 40:129-144.

Research papers in preparation
Stratton, G.E. Phylogeny of Schizocosa: insights into the evolution of behavior.

Other Publications:
Stratton, G.E. 1996. Wolf spiders: laboratory exercises investigating behavior and distribution. Drawings by E. Hebets and M. Persons. Funded by grant from the Woodrow Wilson National Fellowship Foundation. This was adopted by the Association for the Study of Animal Behaviour (ASAB) for use in Britain.

Stratton, G.E. Strategies for Developing Skills in Teaching: Application of Microteaching to a Laboratory Setting. “Strategies of Success Newsletter” published by Wm. C. Brown. Fall 1999. No. 31.

“Scytodes vs. Schizocosa: Predatory techniques and their morphological correlates” (With R. Suter).

“Evolution of water surface locomotion by spiders: a comparative approach” (with R. Suter and P. Miller).

American Arachnological Society, Keene, NH. July 2001. “The evolution of neustonic locomotion in spiders” (with P. Miller and B. Suter.)

Mississippi Academy of Sciences, Tupelo, MS Feb. 2001. “Phylogeny of Schizocosa: insights into the evolution of behavior.”

Other presentations at professional meetings: