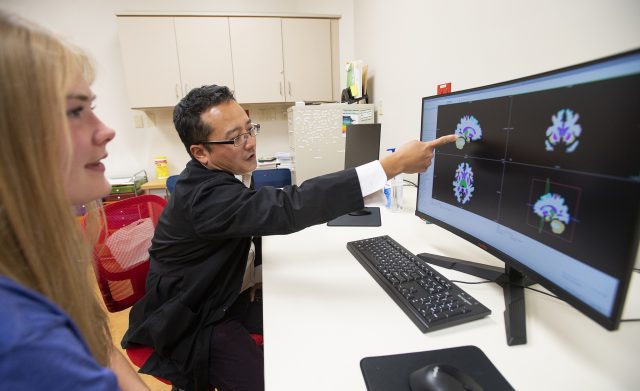 OXFORD, Miss. – A University of Mississippi senior has published a scientific paper on one of the most essential human needs: sleep.

Nicole Jones, a biology major in the Sally McDonnell Barksdale Honors College, is investigating whether the size of the caudate nucleus, a structural component of the brain, can be linked to how long people sleep.

“Research based on sleep has been very interesting to me,” Jones said. “I think it’s really cool that there isn’t much out there on it and it’s a hard concept to study.

“Based on what was available, I was able to narrow my project down to look at size-related data of different areas of the brain and sleep duration data.”

The paper, “Sleep Duration is Associated with Caudate Volume and Executive Function,” was published in Brain Imaging and Behavior’s online edition, with a print edition forthcoming. The bimonthly, peer-reviewed publication features research that uses neuroimaging to study higher brain function.

Tossi Ikuta, associate professor in the Department of Communication Sciences and Disorders, has advised Jones on her honors thesis and is co-author on the paper. Undergraduate student research is rarely published before a student graduates, he said.

“People with doctorate degrees strive to publish in this journal,” Ikuta said. “Nikki has accomplished her publication even before her bachelor’s degree.

“I have seen undergraduate students listed as one of the authors in a peer-reviewed journal. However, it is as unusual as an elementary school student doing linear algebra.” 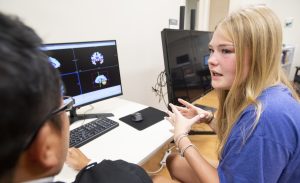 The caudate nucleus is a pair of structures within the medial part of the brain, the basal ganglia. The caudate is associated with high-level functioning such as memory, learning, reward and motivation. This level of functioning can be linked to sleep, Jones said.

“That’s why we started there,” Jones said. “We found that the size and volume of the caudate nucleus was correlated with sleep duration, which means the larger the size of the caudate was in the subject’s brain, the longer they would sleep.”

This was initially found across all age ranges in the study, which included more than 400 people ages 10-85. Upon closer investigation, Jones and Ikuta discovered that the association came primarily from the younger population.

The results bring scientists one step closer to understanding the role of the caudate in sleep, Ikuta said.

Jones, a native of Nolensville, Tennessee, enrolled at Ole Miss based on its welcoming atmosphere. She had yet to realize the opportunities for firsthand research experience at the university.

“After touring the university in high school, I knew I wanted to come here,” she said. “It’s an intimate campus, but also big enough that I thought there would be lots of opportunities.

“I never realized that I would be publishing a paper – it was a huge surprise to me.”

After graduation, Jones hopes to continue on a path related to research and science in general. She said that her experience working with Ikuta grew her confidence in this area.

“Writing a journal and co-authoring with someone who is well-known in their field was really nerve-racking in the beginning, but Dr. Ikuta grew my confidence and put my ideas out there,” she said. “I would encourage other students to try research, even if it’s just dabbling in it on a volunteer basis.”