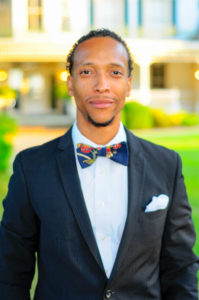 EJ Edney currently serves as the Assistant Vice Chancellor for Diversity and Inclusion at UM where he works to enhance efforts to support diversity, equity, and inclusion. His work and research focus on mentoring and its capacity to affect issues of equity and access for marginalized student groups. His work has received numerous awards including the Donald Cole Award for Excellence in Mentoring (2016) from the UM Black Student Union, the Laws Innovation Award from the UM School of Education (2018), and the Frist Student Services Award – the top student services award at UM (2022).

Edney has worked in various areas on campus, which have provided him a broad set of experiences. Prior to  being named Assistant Vice Chancellor, EJ served as Director of the Center for Inclusion and Cross Cultural Engagement,  Program Coordinator for the Luckyday Scholarship Success Program, and as a Coordinator for National Pan-Hellenic Council fraternities and Sororities. EJ’s professional experiences have helped to galvanize his passion for supporting and promoting equitable access to student success. As such, he has been a consistent fixture on numerous committees and working groups assembled to approach issues of diversity, equity, and inclusion.  Edney is mentor, scholar, educator and leader.

What is the value of a liberal arts education in today’s world?
“My liberal arts background provided transferrable skills in lots of different areas.  I maybe didn’t have the language for it at the time, but I learned to make connections, to take ideas in one area and apply them in another.  I could find linkages and common factors between different complex problems, to approach those problems with the grounding of knowledge across various disciplines or areas. In short, I became a better thinker.

For example, my background in biology and chemistry helps me as Assistant Vice Chancellor for Diversity and Inclusion, because I can try things, see what happens, and talk objectively about the results. Sociology and the humanities let me access and digest the frameworks that teach me how the world works, how folks might be experiencing the world we are trying to create.

The liberal arts education equips you with the skills needed in today’s world, gives you an opportunity to make connections, and lets you become responsive to the needs of society as you become more aware.”

Edney Works to Widen the Ladder of Opportunity for All.  New Assistant Vice Chancellor has Helped Increase Student Access to University.  Written by JB Clark 3/3/22

Norris Allen “EJ” Edney’s grandfather was a proud Tougaloo College graduate and outsized figure on the Alcorn State University campus, so when Edney enrolled in the University of Mississippi, he knew he was taking a big chance.

Now he’s the university’s assistant vice chancellor for diversity and inclusion and a valuable member of the campus community.

As an ambitious young Mississippian, Edney was being recruited into high-touch, small-cohort programs at UM. His family was still wary of the university’s treatment of Black students, whether he went to Alcorn or not.

“But it bothered me even more when I got to campus and that tension was here as well.”

Donald Cole, retired UM student, educator and administrator, was longtime friends with Edney’s grandfather, and has followed Edney’s time as a student and staff member on campus.

“By all means, EJ should have gone to a different school – he broke rank with his family, “Cole said. “But, he loves this institution and he’s studied this institution. He knows the shortcomings and he knows the strengths and he’s an individual that can bring people together.”

So Edney spent his time as a student searching for ways to include people of more backgrounds, experiences and abilities in the UM community. While pursuing his master’s in higher education and student personnel, he participated in creating the university’s Center for Inclusion and Cross Cultural Engagement.

As an undergraduate, Edney was a biology major with plans for medical school, but he began to envision a future as a leader in increasing diversity, equity and inclusion on campus. So, he decided to pursue a future in DEI instead of medicine.

In 2019, he finished his doctorate in higher education as was named director of the very center he helped establish, a position he had come to consider his dream job.

“I fell in love with this field because of this place,” he said. “I think that gives me a unique perspective because when I sit in spaces on campus, work with students to get connected or even write grants, I don’t just imagine myself in that student’s position, I can feel myself in their situation.”

Having attained his dream job and more, Edney hopes to create an environment where all students have that same opportunity.

“I think about my role as one that is seeking for us to more fully actualize our mission as the public flagship institution of Mississippi,” Edney said. “If we are to accept, frame and think about education as the great equalizer – the ladder of opportunity – then as a public institution, it’s our job to make sure that as many students as possible have an opportunity to climb that ladder and not get in the way of making that their reality.”

He’s served in many roles at UM, including program coordinator for the Luckyday Scholarship Success Program and as a coordinator for National Pan-Hellenic Council before joining the Division of Diversity and Community Engagement, and in those roles he’s built and grown initiatives to keep students on track to graduation and facilitated a series of difficult public conversations on campus during trying times.

Edney has made outstanding contributions in increasing access to the university, said Shawnboda Mead, vice chancellor for diversity and community engagement.

“He is an incredibly valuable member of our team and has played an integral role in the growth of the Division of Diversity and Community Engagement,” Mead said. “His promotion is a reflection of many years of hard work and his deep commitment to making the University of Mississippi a welcoming campus for all.”