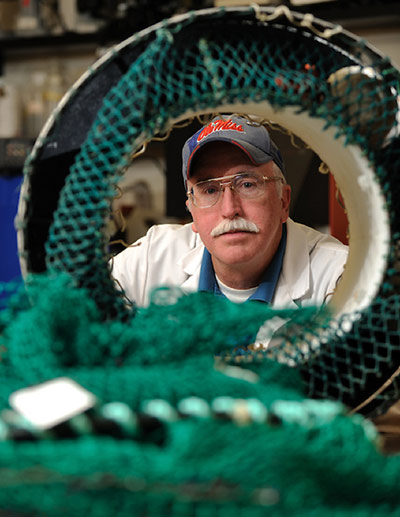 Professor
Department of Biology
The University of Mississippi

Current research interests involve the biomechanics and efficiency of fish locomotion, metabolic rate determinations, respiratory physiology, energy budgets, and growth and reproduction in sharks.
Back to top of page 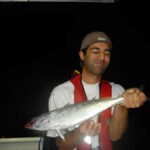 Sharks, Skates, and Rays of Gulf of Mexico, a Feild Guide, by Glenn R. Parsons

The cookie cutter shark lives in the deep Gulf, looks like an Italian sausage with bulging eyes, and glows in the dark. It feeds by attaching itself to a sperm whale and gnawing hunks of flesh. Often misidentified as a shark, the smalltooth sawfish is really related to the rays and may be in danger of disappearing in Gulf environs. The twenty to thirty teeth on each side of its snout work well for rooting up food from the sandy bottom or slashing through schools of prey. But the teeth tangle easily in commercial fishing nets.

In Sharks, Skates, and Rays of the Gulf of Mexico, fascinating rarities such as these and all the commonly sighted species await the naturalist, commercial or recreational fisher, outdoor enthusiast, or beach-goer. This guidebook covers almost all the species of sharks and rays that cruise Gulf waters from the abundant, shallow-dwelling finetooth shark and the frightening electric ray to the deep-dwelling goblin fish.

Color photography, line drawings, and easily understood “keys” developed exclusively for this book help the reader quickly identify species. In addition to general information on reproduction, sensory systems, feeding, and other aspects of marine biology, there is practical information on how to reduce the risk of shark attack, how to prevent and treat stingray wounds, and how to safely catch, handle, and release a shark.

Personal and anecdotal information gathered from twenty-five years of shark research as well as significant facts and figures make this book the ideal companion for anyone scouting the Gulf for its most exciting denizens.

All proceeds from the sale of this book are donated to the Hurricane Katrina Relief Fund.

From the Publisher
This guidebook for spotting and identifying 42 sharks and 25 skates and rays includes:

Parsons, Glenn R. 2006.
Sharks, Skates, and Rays of the Gulf of Mexico: A Field Guide.
University of Press of Mississippi, Jackson MS. 165 pgs.

Parsons, Glenn R. and E.R. Hoffmayer. 2007. Identification and characterization of shark nursery grounds along the Mississippi and Alabama gulf coasts. In: Shark Nurseries, of the Atlantic and Gulf Coasts of the U.S. American Fisheries Society publication. Refereed Book Chapter.

Parsons, Glenn R. and Eric R. Hoffmayer. 2005. Seasonal changes in the distribution and relative abundance of the Atlantic sharpnose shark, Rhizoprionodon terraenovae in the north central Gulf of Mexico. Copeia, 2005:914-920.

Parsons, Glenn R. and Peter Smiley. 2003. The effect of environmental changes on swimming performance of the white crappie. Journal of Freshwater Ecology, 18:89-96.

Carlson, J. and Glenn R. Parsons. 1997. Age and growth of the bonnethead shark from northwest Florida with comments on clinal variation. Environmental Biology of Fishes, 50:331-341.

Smiley, P. and Glenn R. Parsons. 1997. Effects of photoperiod and temperature on the swimming performance of white crappie. Transactions of the American Fisheries Society, 126:495-499.

Parsons, G.R. & J.L. Sylvester 1992. Swimming efficiency of the white crappie, Pomoxis annularis. Copeia. (in press).
Back to top of page