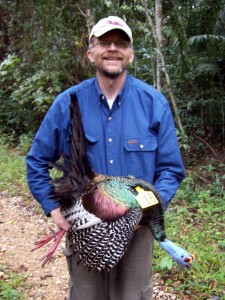 Professor
Department of Biology
The University of Mississippi

Ph.D. University of Florida
Back to top of page

Darwin was the first to suggest that sexual selection (that is, mate choice and competition for mates) could be a selective pressure shaping the evolution of populations. At the time his Victorian colleagues scorned the idea that female animals could be “smart” enough to be choosy about their mates. Over the past three decades or so a resurgence of empirical interest in sexual selection has demonstrated the widespread influence of sexual selection on the behavior and morphology of animals and plants.

My current studies of sexual selection in the Wild Turkey build on my previously published work.

The wild turkey (Meleagris gallopavo) is a highly polygynous, sexually-dimorphic species, well suited to testing the intraspecific predictions and assumptions of ‘good genes’ models of female choice. Previously I tested alternative hypotheses for the maintenance of ‘fleshy’ ornamentation in males of this species. In addition to uncovering a non-sexual function for the brightly colored, bare head of the male wild turkey (which is crucial for maintaining sublethal body temperatures under warm ambient conditions and during physical exertion), my work also demonstrated that one aspect of male head ornamentation, the frontal process, or snood is subject to both intersexual and intrasexual selection. Captive female wild turkeys prefer to mate with long snooded males, and during one-on-one interactions, a male turkey is subordinate to males with relatively longer snoods. These results were demonstrated using both live males and controlled artificial models of males.

Why should turkeys pay such close attention to the length of a male’s snood? Data on the parasite burdens of free-living wild turkeys revealed a negative correlation between snood length and infection with intestinal coccidian (Eimeria spp.) a deleterious protozoan parasite. That is, in the wild the long snooded males preferred by females and avoided by males seemed to be resistant to coccidia infection. I have suggested that this is a case of female choice for male ‘good genes’. Females may be choosing coccidia-resistant males as mates so that their own offspring will inherit resistance genes and be more likely to survive. Indeed my colleagues and I have demonstrated that male snood-length is correlated with MHC genotypes associated with the immune response. These disease-resistance genes would be inherited by the preferred male’s chicks, presumably improving chick survival. I also hypothesized that coccidia-free males were probably more dominant than infected males. If so, selection should favor males who can assess the quality of their competitors before fighting, and thus avoid wasting energy in fights that they are likely to lose.

Subsequent research demonstrated that experimental infection of males when they are young results in them growing shorter snoods. Infection also produces feathers that are duller in the reflectance of ultraviolet light. The physiological mechanism by which these parasites limit ornament growth remains unclear, however. Lastly experimental infection also has an effect on female turkeys; they become choosier about their mates!

My current research in wild turkey mate choice focuses on the following questions:

a. How does variation in a wild turkey hen’s immunological exposure to parasite antigens affect her mating behavior?

b. Which metrics of mate sampling are indicative of general preferences and which are associated with individual preferences?

c. How does the risk of overheating during courtship limit a male’s ability to acquire mates?

Prospective graduate students, post-docs and other collaborators should feel free to contact me about sexual selection research.

Habitat destruction and species extinction are occurring at unprecedented rates. Some scholars estimate that as many as 1,000 species are driven to extinction each year. This catastrophe is due to human population growth and inefficient use and management of our natural resources. Some argue that extinctions have always occurred (remember the dinosaurs) and are nothing to worry about. While it is true that millions of species extinctions have occurred over the past billions of years, they never occurred as quickly as they are now. Also, just because extinctions sometimes occur “naturally” doesn’t mean they are a good thing. There are lots of reasons to protect the biodiversity of our planet.

Why do I care about protecting biodiversity?

First, I’m a biologist…it is my profession to study causes and functions of species diversity. The loss of species directly threatens my livelihood. Second, I love natural habitats. The diversity of nature enriches our lives and inspires our thoughts. Third, natural systems feed, clothe and protect us. Photosynthetic organisms remove carbon dioxide from the air and release oxygen, forests hold and filter water for us to drink, and most of our medicines were originally discovered in plants, animals and fungi.

What can YOU do to save the world’s biodiversity?

There are some easy everyday activities that you can do to protect your local and global environment: CONSERVATION TIPS

You can also help groups that are trying to rescue our planet’s biodiversity by volunteering for them, getting involved in their legislative efforts, and/or donating much needed financial assistance. Here are links to the websites of organizations that have demonstrated their ability to do effective conservation on local and global scales.

What am I doing to conserve the world’s biodiversity?

In addition to my activism as a private citizen concerned about habitat destruction, I have a professional commitment to conservation.
This professional activism involves two approaches. Promoting Animal Behavior as a Valuable Tool for Conservation Biology

1995 Conservation and Behavior in the Wild, ABS meeting, Lincoln Nebraska

Editing and/or Writing Published Works on Conservation and Behavior My major published contribution to the role of behavioral study in conservation is a multiauthor volume entitled “Behavioral Approaches to Conservation in the Wild”. Published in 1997 by Cambridge University Press, and coedited by Janine R. Clemmons and Richard Buchholz.

Chairing the Animal Behavior Society’s Conservation Committee The Animal Behavior Society (ABS) recognizes the importance of conserving biodiversity for our profession. They have authorized the Conservation Committee to construct a web page (coming soon!) that provides information for those interested in the role of behavior in conservation work. We have also been asked to identify and invite special conservation plenary speakers for the ABS meetings in 2000 and 2001. The committee is pleased to announce that Dr. Dee Boersma (past president of the Society for Conservation Biology) will speak on the role of behavior in conservation at the 2000 meetings at Morehouse College in Atlanta, Georgia. There will also be an open paper session on conservation for anyone that might want to speak on the subject. See the ABS website for more details about the meeting.Conservation Research and Training

My research experience in conservation dates back to when I was in high school and assisted a Bronx Zoo study of the nutritional requirements of hand-raised birds. Since that time I’ve worked on the conservation of cracids (curassows, guans and chachalacas) in captivity and in their natural habitats in South America, cooperated with state wildlife managers to understand the impact of rodents on the restoration of bottomland hardwood forests in Louisiana, helped a graduate student translocate nestlings of the endangered Red-Cockaded Woodpecker, studied the effect of inbreeding on climbing and foraging in White-Footed Mice, and the effect of harvesting introduced guava trees on native plants in Hawaiian forests.

In the future I hope to work with students interested in reintroducing endangered species to the wild, understanding the effects of habitat fragmentation on behavior, detecting behavioral characteristics of extinction prone species, investigating the role of disease in conservation, and exploring the role of seed dispersal and predation on forest diversity and restoration. 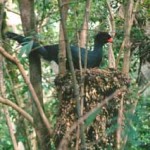 Buchholz, R. 2004. Effects of parasitic infection on mate sampling by female wild turkeys (Meleagris gallopavo): Should infected females be more or less choosy? Behavioral Ecology  15(4): 687-694.
Back to top of page